How To Die With No Regrets 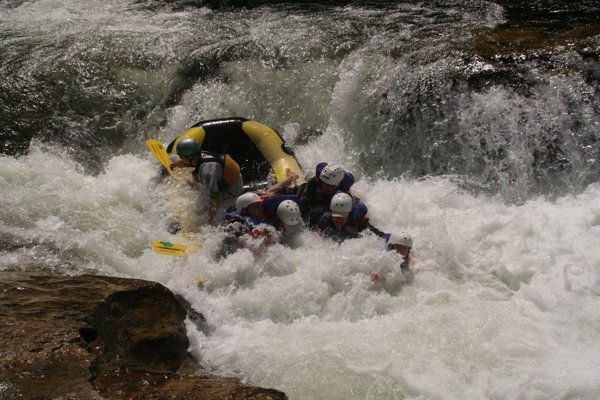 It all happened too fast…

The raft entered the rapid, heading directly toward the rock wall, and bouncing up and down through the waves. I heard the guide yelling something about leaning in and holding on. The side of the raft hit the rocks and was thrust by the strong current further up the wall. The four people who were sitting across on that raft a minute ago were now almost directly above me, holding on to their dear lives.

Then Ralph fell off the raft and was swept away by the strong current.

But that wasn’t the worst part…

The huge raft behind us was now entering the rapid, with 9 people onboard, and was heading on a direct course toward the rock wall that Ralph was trying to swim away from.

I heard our guide yelling “NO! NO!” and took a final glance at Ralph’s floating body disappearing behind the big blue raft.

I closed my eyes and clenched my teeth. That was NOT how I’d imagined a relaxing white water rafting trip to end…

It started out a beautiful Friday morning on the banks of the south fork American river. My girlfriend and I had camped the night before, and woke up on the sound of crashing river waves. One of the perks of running your own business is that you can decide when to take your weekends, and we had decided that Thursday and Friday would be our weekend, and booked a white water rafting trip.

But what I did not expect is that we’d end up on a raft with 60+ year old seniors who’d just made their big escape from of a retirement home in the East Bay to come and have an adventure on the river.

“This is going to be booooooring!” I thought.

Once we got into the water, I realized I was wrong: Apparently, when the remaining years of your life drop to a single digit, you start to take life less seriously, and more adventurously. After all, hitting the ground a couple of years sooner, and hitting it on your own terms, is more exciting than going quietly on a bed in a retirement home.

These guys turned out to be a fun and relaxing crowd. And when the raft was floating peacefully on a quiet segment of the river, I asked them:

“When you look back at your lives so far, is there anything that you regret, or something you wish you would have done differently?”

“I wish I had taken music more seriously,” said Marianne, “I grew up in a family where everyone is a performer or a musician, but I’ve chosen the safe route and took on a career that I didn’t like. Now I wish I’d continued my practice and never fallen into the status quo”

“I wish I had relocated to a foreign country where I’d learn a new language and experienced different ways of living and thinking, instead of locking myself up into the same culture and perspective my entire life,” added Kent.

“I wish I had become a rock star,” Doug said with a smile that carried a hint of melancholy, “As a child, I’d always believed I could become one, but when I grew up, I worried what people might think if I had tried and failed. The closest I can get to that dream right now is to grow a pony tail and sing on Karaoke nights at the retirement home”

In turn, each of them added to list of wishes and regrets, except the gentleman sitting quietly at the end of the raft.

“What about you, Ralph?” asked Lindsey, “What would you have done differently if you were to live your life all over again?”

“Absolutely nothing,” said Ralph with a confident smile.

“I started 8 companies, hired and worked with the best people, and had a blast every single day of my life!” Ralph answered “I’d do it exactly the same if I were to do it all over again”

I smiled and nodded in agreement.

“What about you?,” asked Lindsey who was now more curious to get everyone’s answer.

“I’d have started my business much sooner,” I replied, “I thought I had to wait until I knew what I was doing, but that was a mistake. I still don’t know what I’m doing, but I became much better at figuring things out as I go.”

It was Ralph’s turn to smile and nod in agreement.

Less than an hour later, Ralph’s body was being carried through the cold waves toward the rock wall, and a huge blue raft with 9 people onboard was on course to crash his head against it.

Fortunately, the guide steered the raft away from the rocks in the last moment, turning it around so that two people could manage to pull Ralph into the raft.

For the remainder of the trip, I contemplated the regrets of the group on that raft…

I realized that all regrets were things that people DID NOT do, rather than things they DID. They did not follow their dreams out of fear of failure or worry of judgements. And it’s only near the end of the journey that they realized they should have done all those things when they had the chance to, and before it was too late to do so.

And the only person with no regrets was someone who did what he wanted over and over again.

I didn’t ask Ralph if his companies succeeded or failed. It didn’t matter. What mattered is that he started them. And for that reason alone, he had no regrets.

– What I wish someone had told me 4 years ago

– How I launched a profitable product in 3 hours!

– How to prototype iPad apps in 30 minutes or less