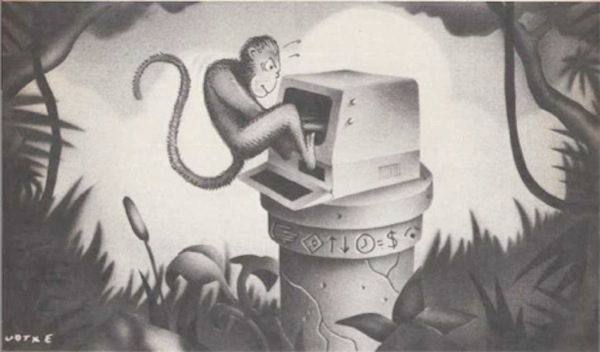 There is a popular method used in the East to capture monkeys: A hunter places a banana in a bowl with a narrow opening at the top, and fixes the bowl somewhere in the jungle. A monkey passes by and notices the smell of banana coming from the bowl. He inserts his small arm through the narrow hole, grabs a banana and pulls his hand out. But the hole in the bowl is too narrow for his fist holding banana to pass through. The monkey tries pulling harder but he only hurts his wrist against the sharp edges of the bowl.

In the meantime the hunter is approaching confidently. He sees the monkey struggling frantically and smiles at the sight he’s witnessed hundreds of times before. The monkey is holding on to the banana so hard that it’s impossible for him to realize that it is the one thing that is standing between him and his own freedom.

And all the monkey needs to do is to let go of the banana and he’ll be free, but the hunter is now a few feet away. At this point most monkeys start screaming and pull their arms so hard that they faint from pain even before the hunter reaches them.

Sometimes a monkey surrenders to the fact that the hunter is going to capture him when he sees them coming. He just sits next to that bowl accepting his destiny. And in relaxing to that destiny, his hand lets the banana slip away and he is surprised to see that he is free when he stopped trying to be free while holding on to the banana.

Even fewer monkeys who smell the banana, look at the bowl for a bit and start to think: why would someone place bananas in a bowl and leave them out in the open? When something is too good to be true, most often it is not. “May be there are more bananas up the trees,” they think. And even though it would take them a lot more effort to climb several trees before finding any bananas, it’s worth it, because they wouldn’t be giving up their freedom to reach for the ones inside the bowl.

Some of them end up finding enough banana to survive on, and a few find a tree where no other monkey has been before, and it’s got enough banana to feed them for life. Many others struggle to find enough banana to eat for the day. And some perish in search for their own bananas.

But even those who didn’t find any bananas up a tree agree that the view from that tree top was totally worth the climb.